Savior on a Stick 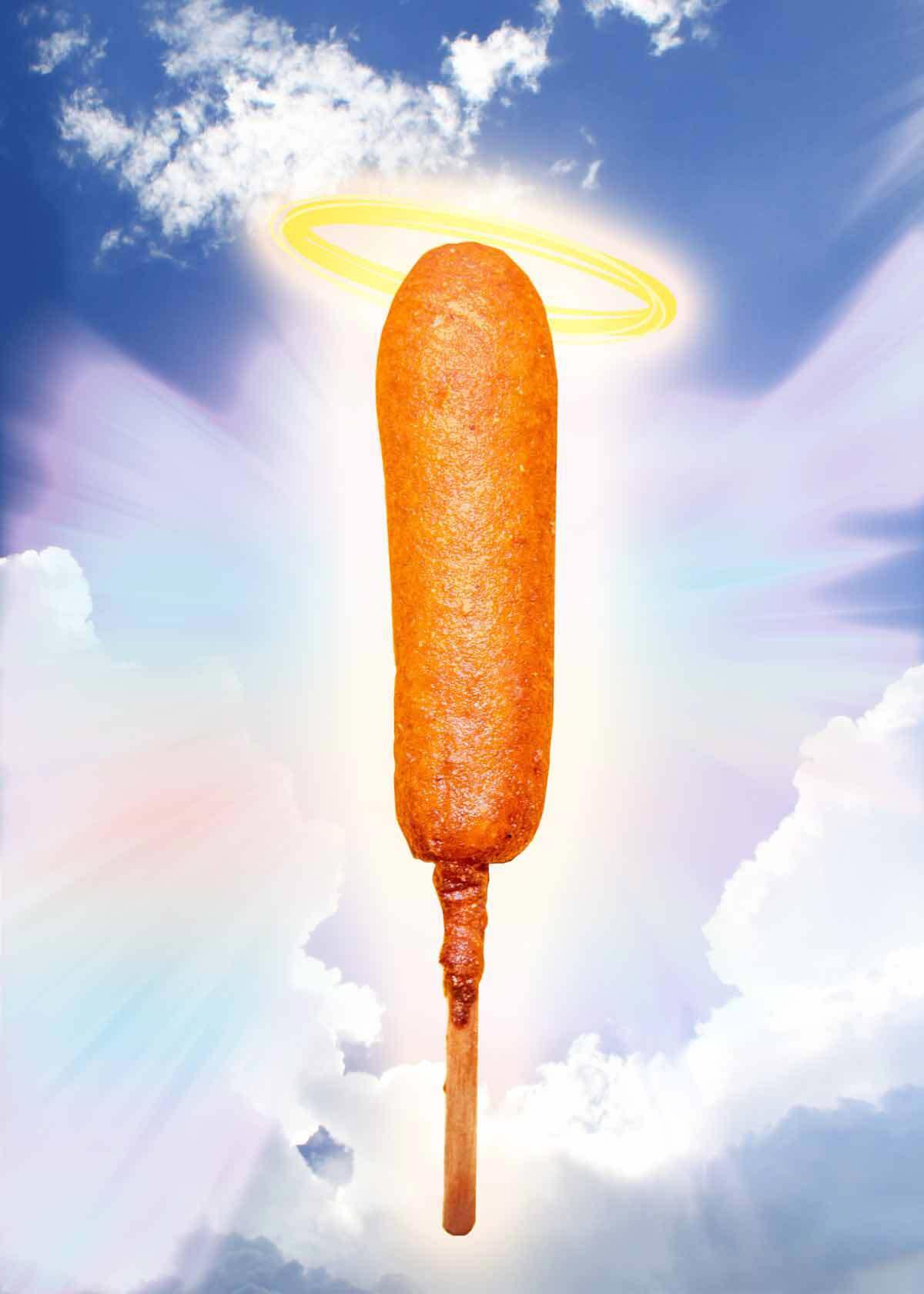 Savior on a Stick

In Savior on a Stick, the ubiquitous state fair food, corn dogs, play a critical—Momma Leite may even say divine—role in keeping David alive during a 3-month sojourn in Dallas.

June 1988. I stood on the front porch of my friend Patty’s Arlington, Texas, home with suitcases in hand, not unlike Felix Unger in the opening credits of “The Odd Couple.” Like him, I was being thrown out–not out of a tiny Upper East Side classic six–but rather a sprawling six-bedroom casa, complete with pool, three-car garage, automatic sprinkler system, and, what I would miss most, a freezer full of corn dogs. As Patty’s lawyer–a bowling ball with legs who had skin like tobacco-colored crepe paper–put it, I was an “unnecessary risk.”

Patty and her husband, Dan, were getting divorced. While he was shacking up with his dental assistant, I was living non-conjugally with his wife and three kids after I had, for the nth time, denounced New York City. The greater Dallas area was my new home, I told myself, and I embraced it with all the excitement and innocence of Kennedy in 1963.

I chose Dallas because Patty and her two friends, Laverne and Maxine (clearly, not their real names), were planning to open a spiritual center and wanted me to join as advisor. (This was during the time known as the Great Shirley MacLaine Epoch, so forgive any star-blinded lapse in judgment.) I was no more qualified to rope and brand a Texas longhorn that I was to advise these under-sexed, overpaid housewives. But we had met at a conference for the great spiritually unwashed and took a shine to each other. Plus, I’d sublet my apartment for three months as a first step in escaping my strangled existence in NYC.

When Dan, who was looking for any reason to unseat Patty from the house he financed, discovered a “light-in-the-loafers city slicker” mixing with his impressionable children, I was on the porch within an hour.

Of the three Lone Star Andrews Sisters, Laverne was the most compassionate.

“Let’s move you in with CarolJean,” she said, patting the seat of her pickup as I tossed my bags into the back. CarolJean was her 21-year-old daughter trying the living-on-my-own gig, and none too successfully. She was a retired high school baton twirling champion, who, after the glittery sequins unraveled from the costumes that I later discovered she still wore around the house, gave up and took to life on the couch.

When we entered her apartment, she was, as predicted, prone on the sofa–in each fist a baton twirling like a propeller. The slam of the door startled her and, misjudging the height of the ceiling, she scuffed it. Apparently, she must have suffered from significant depth-perception problems: the ceiling everywhere was punctuated with a riot of eraser-gray commas.

“Well, I have to get buffed and fluffed!” Laverne said loudly for CarolJean’s benefit, then she gathered me close. “Bless you, David,” she whispered. “Bless you.” I was left with the eerie feeling that it wasn’t me who was on the receiving end of the goodwill baton.

CarolJean led me to my room, which was empty. “You’ll need a bed, I guess,” she said, knocking off the thermostat cover with a horizontal figure eight of one of her propellers. In the kitchen: “The top two shelves are mine,” she said of the empty fridge, “and you can have this here left side of the freezer.” On the right, nothing but an opened wholesale-size container of frozen fat-free Cool Whip. “Oh, and there’s no gas, either, so you have to cook everything in the microwave.”

With that, she retired to her room, only the occasional thunk of rubber hitting plaster to be heard late into the night.

Life careened downhill after that. Within a week all of CarolJean’s rented living room furniture was repossessed. A month later, so was her BMW, a belated gift to herself for her crowning twirling achievements. After a few more weeks, I’d grown desperate. Patty, Laverne, and Maxine moved on for good. Their token visits petered out (phone calls were out of the question because the line was turned off). They had turned their attention from the spiritual center to an aerobics studio–wedding planning venture. “Drop one sack of lard and pick up another–all in one place!” Patty liked to say.

I meted out my money, trying to budget until I was able to return and reclaim my so-called life. With no car to borrow, I was forced to walk three miles to and from the supermarket once a week to shop for food. One Friday, so depressed by my reduced means, I copped out and walked to the nearest convenience store. And it was there, in front of the frozen foods, with a month left before I flew home, that I had my version of the Epiphany. The very same corn dogs that I’d enjoyed with abandon with the kids at Patty’s house were on sale. And not just on sale–but deeply discounted. Woozy from lack of sustenance, I calculated that if I bought several boxes, and limited myself to three dogs a day (four on Saturdays and Sundays), I could make it through.

Back home, I ripped into a package and slid two dogs (an extra ration, I know, but it was worth it) onto a plate and into the microwave. I knew they wouldn’t have the just-fried crunch of the ones Patty made in the oven for the kids and me, but no matter. As I bit through my joy on a stick, I silently thanked all the pork and beef by-products that went into the making of my meal. The cornmeal coating, which I nibbled off a bit at a time to enjoy the different flavors and textures (yes, a corn dog can have different flavors and textures), was pleasantly mealy and had that slightly chemical sweet taste of Bisquick pancakes that were slathered with butter but bereft of syrup. The hot dog itself was juicy and, well, meaty enough to balance its cornmeal shroud. When I was done, I washed the plate (the water hadn’t been turned off yet) and returned it to the cupboard. Sated, I curled up under a blanket in what I deemed my bed and fell contentedly to sleep.

Over time I took to thinking of corn dogs as my own personal savior, which I know can–at first blush–appear blasphemous. But I meant it with all the reverence and fervor of a tent revival convert. It’s not that I was seeing the face of Jesus fried into the cornmeal coating. Rather, ever since that moment of awakening in front of the frozen food case at the convenience store, I knew I’d be okay. I knew that I’d make it through the long, dark days before returning home.

One breakfast while sitting on the kitchen counter dunking a corn dog into a jar of mayonnaise (by this time the only furniture that wasn’t either repossessed or smashed by CarolJean’s increasingly aggressive displays of indoor twirling was her bed), it dawned on me someone should write a country song called “Savior on a Stick.” It’s not as crazy as it sounds. If Jesus can be on board a car, in a marriage bed, in schools, in a church–why can’t he be on a stick in my corn dog? (Of course, if you’re of a different religious persuasion, feel free to substitute your god’s name here.)

The bottom line is, something or someone caused to me to zig to that convenience store rather than zag to the local Tom Thumb, where prices were significantly higher and I didn’t have a shopper’s card. And that someone was my own personal savior—on a stick or not. Originally published March 28, 2011.