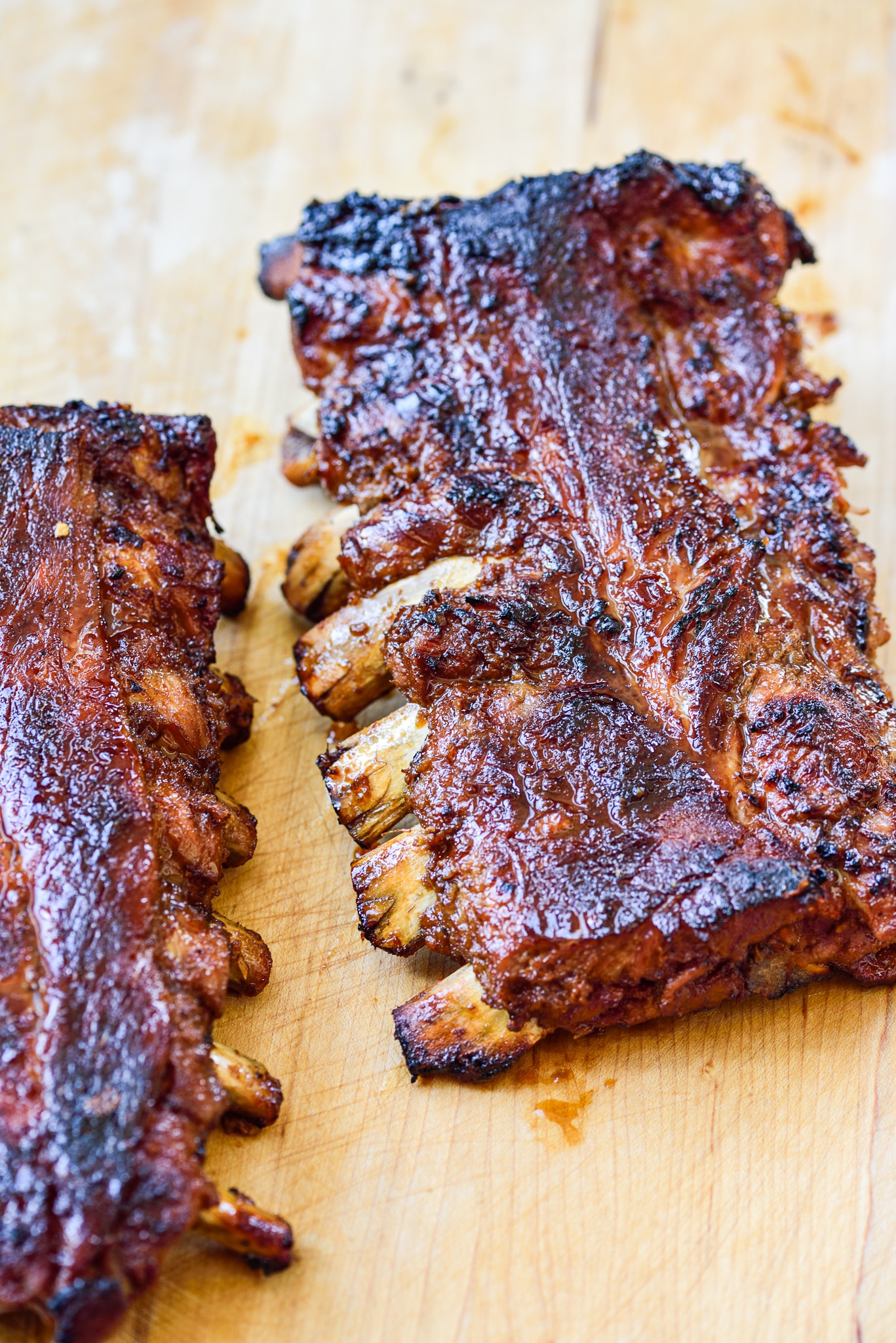 Tender, moist and flavorful Korean marinated BBQ pork ribs! Choose from two different marinades – mild and spicy. Slow cook in the oven until tender, and then finish off under the broiler or on a grill.

These Korean marinated baby back ribs are tender, moist, and flavorful! You can choose from two different marinades – mild or spicy. The ribs are first slow cooked in the oven and finished off under the broiler or on the grill until slightly charred. If you love tender, delicious pork ribs, you’ll love this recipe! It’ll certainly be a nice change from the usual fare — with a dry rub and BBQ sauce.

In Korea, grilled pork ribs are very popular at restaurants where the ribs are partially grilled in the kitchen and finished off at the table on a wood charcoal (sootbul) grill. At home, I like this easy oven method and then either broil or grill to give them a nice char and delicious smoky flavor. 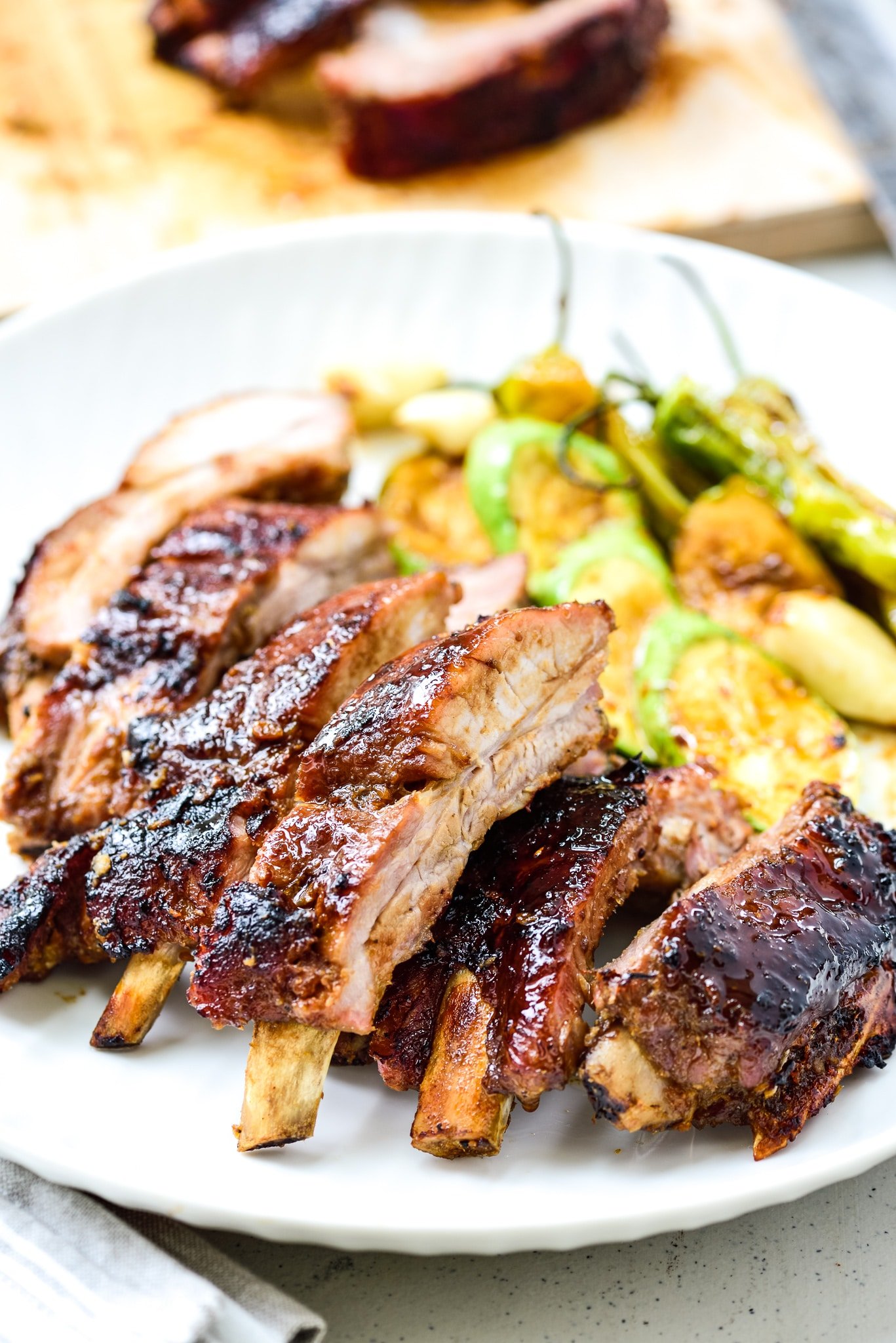 How to prepare baby back ribs

I love to cook with back baby back ribs (aka pork loin back ribs). They are tender, lean, and meaty. It takes much less time to cook than that of spare ribs. I usually buy mine at Costco. They are very well trimmed with the membranes (thin tough white/silver skin on the bone side) already removed. So not much prep work on my part.

If the ribs still have the membranes, you will need to remove them for the marinade to penetrate better. Insert a paring knife under the membrane to carefully loosen it, then slowly pull it by hand away from the bones.

Each marinade is for 2 whole slabs (about 5 to 7 pounds total), which can easily be halved or doubled.

Sweet and savory: This marinade is similar to the beef galbi marinade. However, for pork ribs, I use much more ginger than that of the galbi marinade.

Spicy: The spicy version is the classic spicy pork marinade similar to that used in jeyuk bokkeum. It is slightly sweet with a lot of kick. You can increase the heat level by adding more gochugaru without altering the other ingredients.

In either case, the secret to tasty Korean pork ribs is to use lots of fresh garlic and ginger.

For best results, marinate the ribs overnight or longer (24 to 48 hours if you have time). 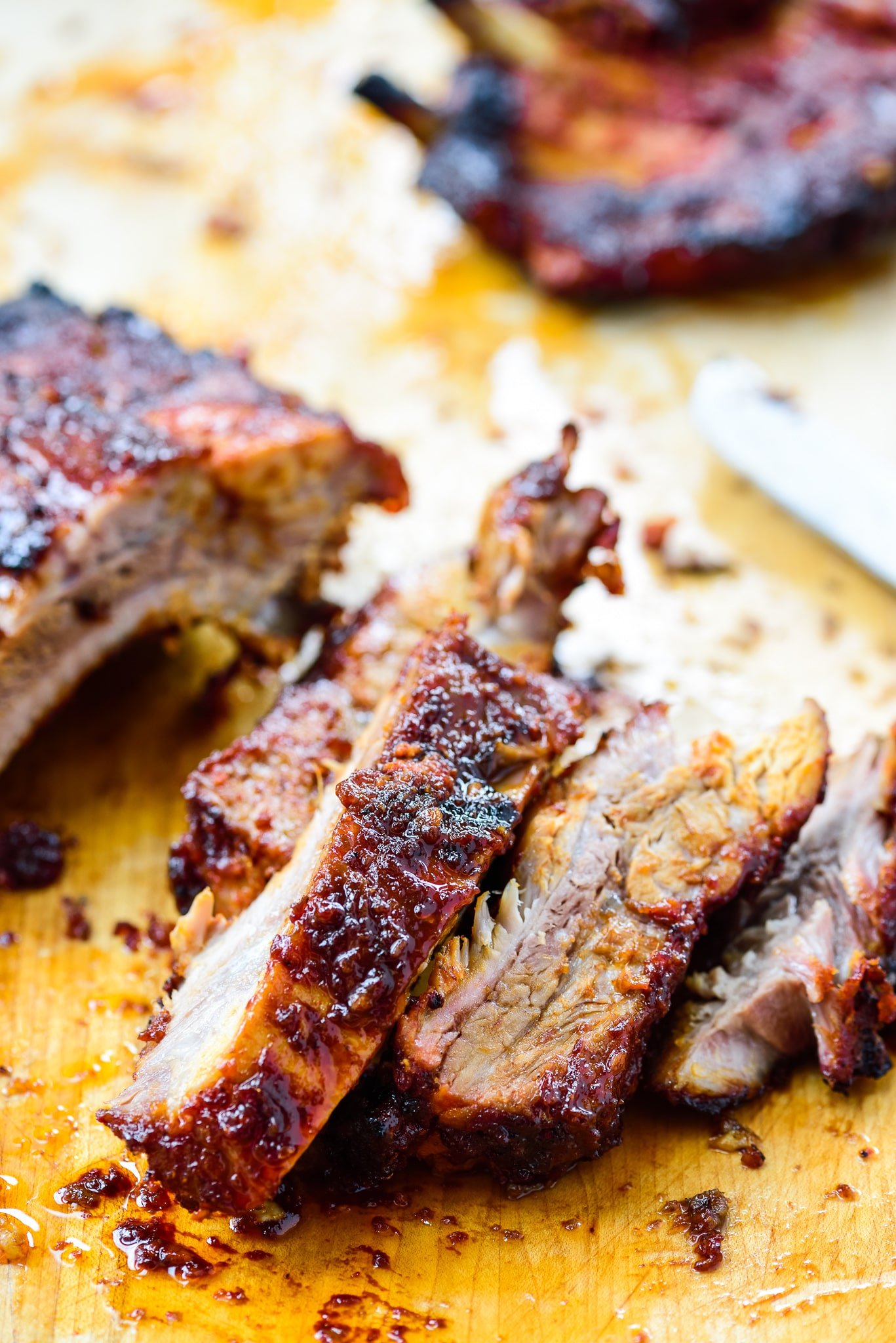 How to cook the baby back ribs

Slow cook the ribs in the oven, covered, at a low temperature with some marinade in the baking sheet/dish. This method gives the ribs a steaming effect, keeping the ribs moist while being cooked.

If you have a favorite way to cook the baby back ribs, feel free to use it with these marinated ribs.

You can bake the ribs up to a day before and keep them refrigerated. Bring refrigerated ribs to room temperature about 1 hour before you either broil or grill them. 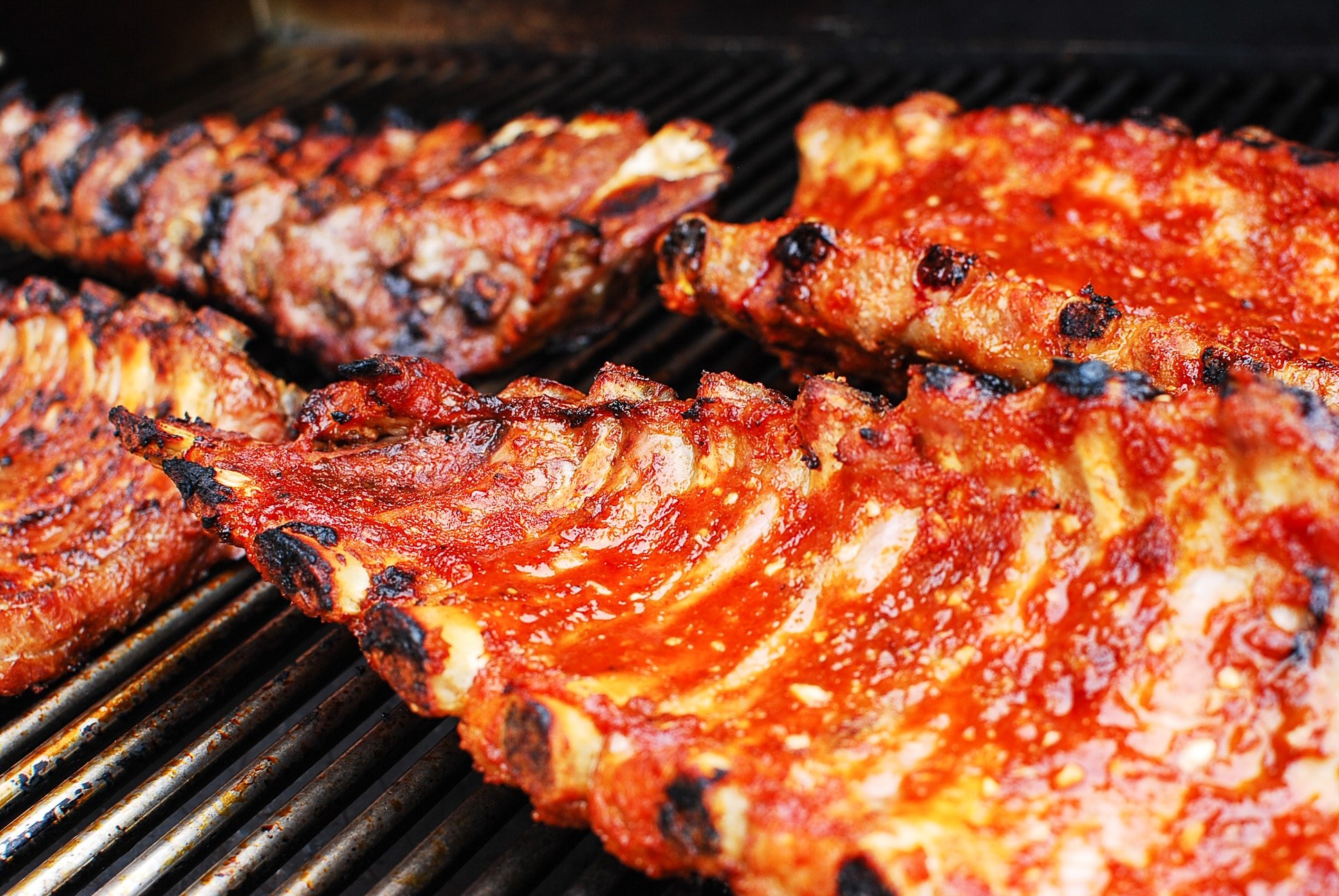 What to serve with the Korean ribs

I like to throw in some sliced zucchini and or eggplants and some chili peppers to the baking sheet/dish during the final step of broiling or on the grill. You can also serve any Korean vegetable side dishes with these ribs, such as spicy cucumber salad and baby bok choy kimchi salad. Some fresh vegetables with ssamjang will be great as well.

See my 15 Korean vegetable side dishes for more. 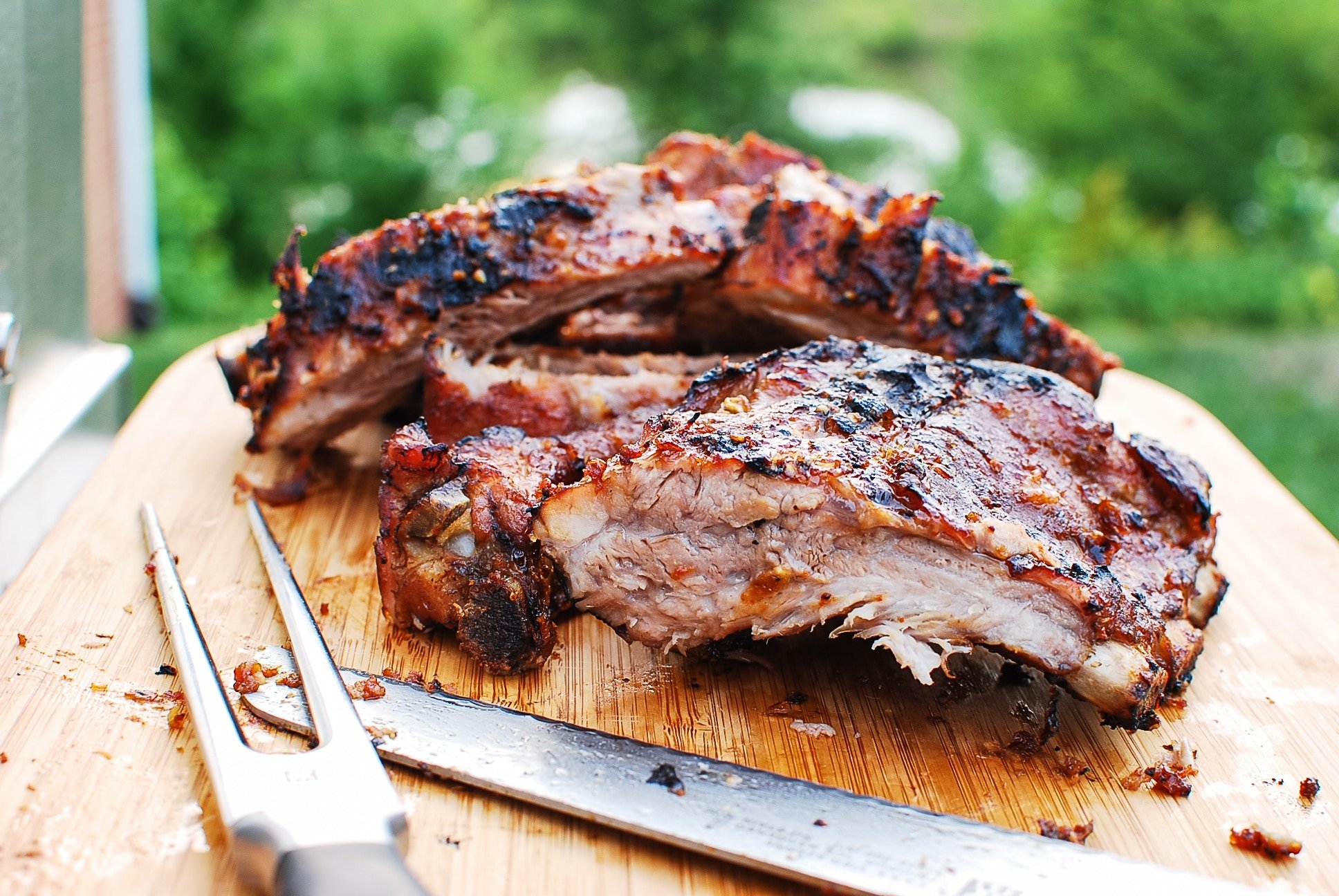 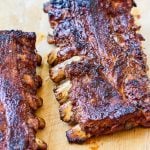 1. For convenience, you can blend garlic, ginger, apple and onion in a blender.

This recipe was originally posted in July 2011. Here, I have updated it with new photos, more information and improvements to the recipe.